Darren Morson has been volunteering at fire halls since he wore short pants. So he’s well aware of the potential danger that exists, thanks to driver distraction and inattention, every time one of his colleagues leaves the Central Saanich Fire Rescue station responding to an emergency. “It hasn’t been brought up as something of high importance, but there was definitely some concern about it,” says Morson, a volunteer lieutenant at the Vancouver Island fire hall for the past five years.

However, harsh winter conditions had taken their toll on the report-light system.

When we pull out, it’s a bit blind on one side, and with our larger trucks, our ladder truck and our tanker, we need to swing out into oncoming traffic. It’s not the busiest road, but it does startle people, especially when you come into their lane. Sometimes people don’t even pull over, and quite often we hold off on hitting the sirens until we’re out and pointing down the road, instead of blasting the house straight ahead. That’s another reason to give drivers a bit more warning.

Morson, who also works at Carmanah as an engineering manager, knew his company was developing a solar-powered advanced warning system for approaching motorists, using technology from ENCOM Wireless.

He figured the Central Saanich fire hall would be the ideal setting for a field trial of the collaborative project between ENCOM and Carmanah.

Three of Carmanah’s R838 Solar ITS Flashing Beacons—two on one telephone pole at a ‘T’ intersection, one on a second pole, and all using built-in ENCOM radios—are activated remotely by the push of a button on an ENCOM CommPAK IO 8M, the master activation unit, inside the station.

The system also allows for portable activation of the beacons from inside a vehicle, thanks to an optional secondary master controller, and programmability features allow users to determine how long the beacons should flash before automatic shut-off.

He pulled over before we’d even got out of the hall. It showed how effective the system can be, for sure.

Thanks to the integrated design, the ENCOM-Carmanah collaboration is extremely efficient for solar-powered use, even in light conditions that would be considered far from ideal.

Within minutes of installation, Central Saanich Fire Rescue received a call for urgent medical attention, with firefighters using the master controller to activate the warning beacons outside the hall. Upon seeing the flashing beacon, the first motorist approaching the fire station took immediate action.

You just don’t want to be causing accidents, and that’s where most injuries happen to firefighters—in the trucks, responding to the call. 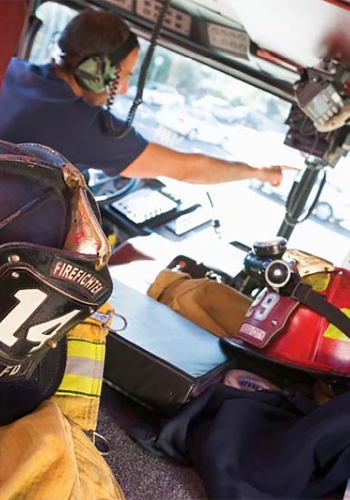 Frankly, it made the difference between being able to do it and not being able to do it. One of the (pole locations) is across the road; we would have had to string wires across, and either trench out or run poles or do something. The cost would have been prohibitive, and we’d have had to disturb the tarmac out in front of the hall… there’s a good possibility that, in the end, it just wouldn’t have worked.

The collaborative Carmanah-ENCOM advanced warning system has limitless possibilities for emergency response personnel in the public sector. An identical system is already being used by La Quinta Fire Service in La Quinta, Calif., while the British Columbia Ambulance Service is taking a hard look at the wireless, solar-powered network for possible deployment across the Canadian province.

It may not speed up our response much—once in a while, you might have a car that will get in your way—but it’s the safety of everyone, when we’re swinging out into traffic, that is so important.